We Care for our Work!

The first Kamba to introduce wood carving in Ukambani was MUTISYA MUGE. He started in 1916 and was selling his carvings to the army men in the First World War in 1917. Mr. Mutisya died in 1929 and was buried at his home in Wamunyu. His carvings were first displayed in Machakos in 1926 was awarded the first award by the Colonial Government. The display and show in Machakos created interest to Muge’s neighbours and he started teaching the practice. Twenty years later i.e in 1946 carvings started been sold in the other countries of the Eastern Africa and extend to Southern Rhodesia (Botswana) after which Kamba men started moving to Central Africa, Congo and then all over the world trading and teaching the art of carving. Akamba Handcraft Industry Co-operative Society was started in 1963 by about 100 carvers, since then, Akamba has grown to a membership of about 2,800 active Members and more than 7000 non members. Capacity We occupy an area that covers nine (9) acres with basic infrastructure in place; the carvings skills are well developed and specialized. Our experience on this field enables us to meet all our customers’ demands. We produce high quality products that attract global clients. The industry has its head quarters in Changamwe along the AIR PORT ROAD withing the Kilindini District, neighbouring the Ports of Mombasa and Moi International Airport. In place is a complete complex comprising of working sheds, quality control section, wholesale shop, export department and a showroom shop. A complete administration block and social amenities are also in place. 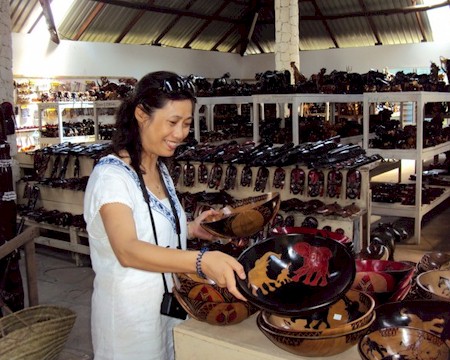